North Florida has so much to offer! Whether you are looking to move to the area or purchase a vacation home on one of our many lakes, rivers or springs one of our realtors can help you find the perfect place. 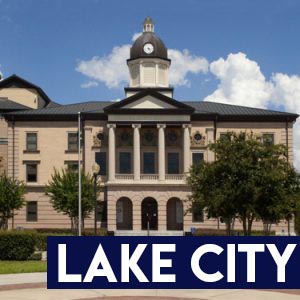 Lake City is located in Columbia County, Florida, and is located in northern Florida, near the Osceola National Forest, about 60 miles west of Jacksonville.

Spanish explorer Hernando de Soto passed through the area in 1539. The city occupies the site of a Seminole village ruled by a chief called Halpatter Tustennuggee (“Alligator Warrior”). The Seminoles left under the terms of an 1824 treaty, and settlers moved in. An important settlement in early Florida, it was called Alligator until 1859, when it was incorporated and renamed Lake City for the many lakes that surround it.

Built along the Pensacola & Georgia Railroad in or prior to 1861, Live Oak was named for a tree under which railroad workers rested and ate lunch. When a railroad depot was built nearby, the small community that sprung up around it was called “Live Oak Station” (first mentioned in records in 1861).

Ruby Strickland became mayor of Live Oak in 1924. She was the first female elected as mayor south of the Mason-Dixon Line after universal suffrage was enacted in 1919. Mrs. Strickland served two non-consecutive terms and represented the area at the Democratic National Convention of 1936

The Lake City Board of REALTORS® (LCBR) is committed to providing an accessible website. If you have difficulty accessing content, have difficulty viewing a file on the website, or notice any accessibility problems, please contact LCBR to specify the nature of the accessibility issue and any assistive technology you use. NAR will strive to provide the content you need in the format you require.

LCBR welcomes your suggestions and comments about improving ongoing efforts to increase the accessibility of this website.